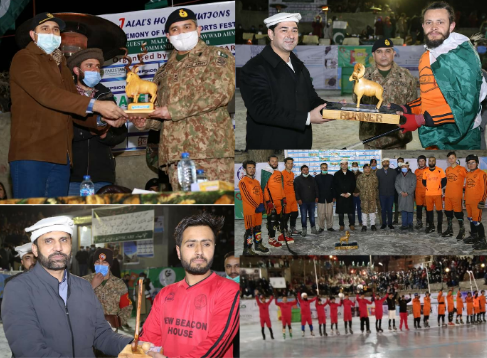 Winter Sports Gala Season 3 has come to an end in Hunza. Syed Asadullah Ghazi from Hunza is sharing the details of this colorful event in his report.

He congratulated the Hunza Nation district administration and SCRAF for organizing the event.FCNACommander Major General Jawad Ahmed was the chief guest at the closing ceremony of Hunza Winter Festival.Today’s program was named after the martyrs of Pak Army. The players lit the ground torch and paid homage to the martyrs of Pak Army who sacrificed their lives for the country.The final match of ice hockey was played between Vista Hotel and New Beacon School in which New Beacon won the tournament with 3 goals to 0.
Despite the severe cold in the program, thousands of people attended the demonstration wearing masks by COVID 19 SOPs.

Islam Abad .Since February 5th, the National International Media has been asking me why Ali Sadpara and his team went to the summit in...

Commercial areas and Amusements parks will be completely locked down on Fridays, Saturdays and...

5 Ways To Travel Smarter In Vietnam, And Have Stories To Tell

# Covid 19. Gilgit The education department is ludicrous about the...

Sad news Muhammad Ali Sadpara and his two companions have...

Among the climbing routes of K2, the most preferred route by...